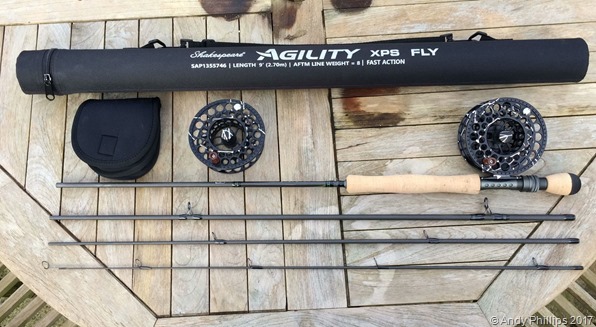 A bit like ‘man flu’ the cursed illness of ‘cabin fever’ can strike the unwary fisherman at any time but particularly I have found at this time of year. Last week it got me good and proper! The symptoms are simple – you go on your regular fishing forums and blogs, people start talking about the new season and things they’ve bought or need, you watch a few YouTube clips of people trying new lures/techniques and then to top it off one of your best mates starts sowing different fishing seeds again in my head… well, that was the final straw and cabin fever hit me big time opening up a whole can of worms that I’m already thinking is going to be a disaster for my long term sanity and finances…. and yes, the photo above says it all.

The idea of fly fishing for bass is something I’ve long pondered but apart from cursory conversations about it, it’s not something I’ve acted on…. until now! Obviously fly fishing for bass is not anything new – far from it – but I don’t mind admitting it is pretty alien to me and the thought of the challenge finally got the better of me and I decided in my feverish state “Why not?”. The result….to get me going a bargain Shakespeare Agility 4-piece 8wt rod (£30) and a large arbor Sea Wolf reel (with spare spool) that I picked up off a well known auction site…… and yes I know this will be just the tip of the iceberg. There’s different lines to think about, leaders, clousers, deceivers and all manner of other flies, plus a bunch of accessories I’ve been reading up on and no doubt just as many that I haven’t even discovered yet! Oh and casting lessons, I’ll need those….. jeeeeeez what have I done!

Seriously though, the thought of catching bass on the fly for me has got to be the ultimate deception. I love lure fishing and there’s no way I can conceive (at the moment anyway!) that fly would replace it quite aside from the fact conditions would often prevent it as a tactic and I might turn out to be a useless at it! However, for me there is just something about the fact you can deceive a fish with a simple fly, fry or nymph pattern that commands an awful lot of respect for the skill of the angler not just in presentation but all round watercraft…. and I want a piece of that!

I can see instances where fly will actually be the best bass tactic anyway and don’t get me started on maybe giving it ago for some of those pollack in Ireland or huge mullet that cruise our South coast waters. There’s a lot to think about but it’s going to be good to learn and an interesting journey just getting there with it… but hey, that’s part of the buzz I get out of fishing and I will be reporting back on this one over the year.

But before you think I’m going completely off the wall with this ‘cabin fever’ induced fly fishing malarkey I need to bring it back that I’ve also been affected on the lure fishing front too…. there just might be a few small lure type parcels landing on the door mat over the coming days and maybe, just maybe, a slightly more ‘Entice-ing’ one in the next few weeks… those ‘in-the-know’ know!!?!